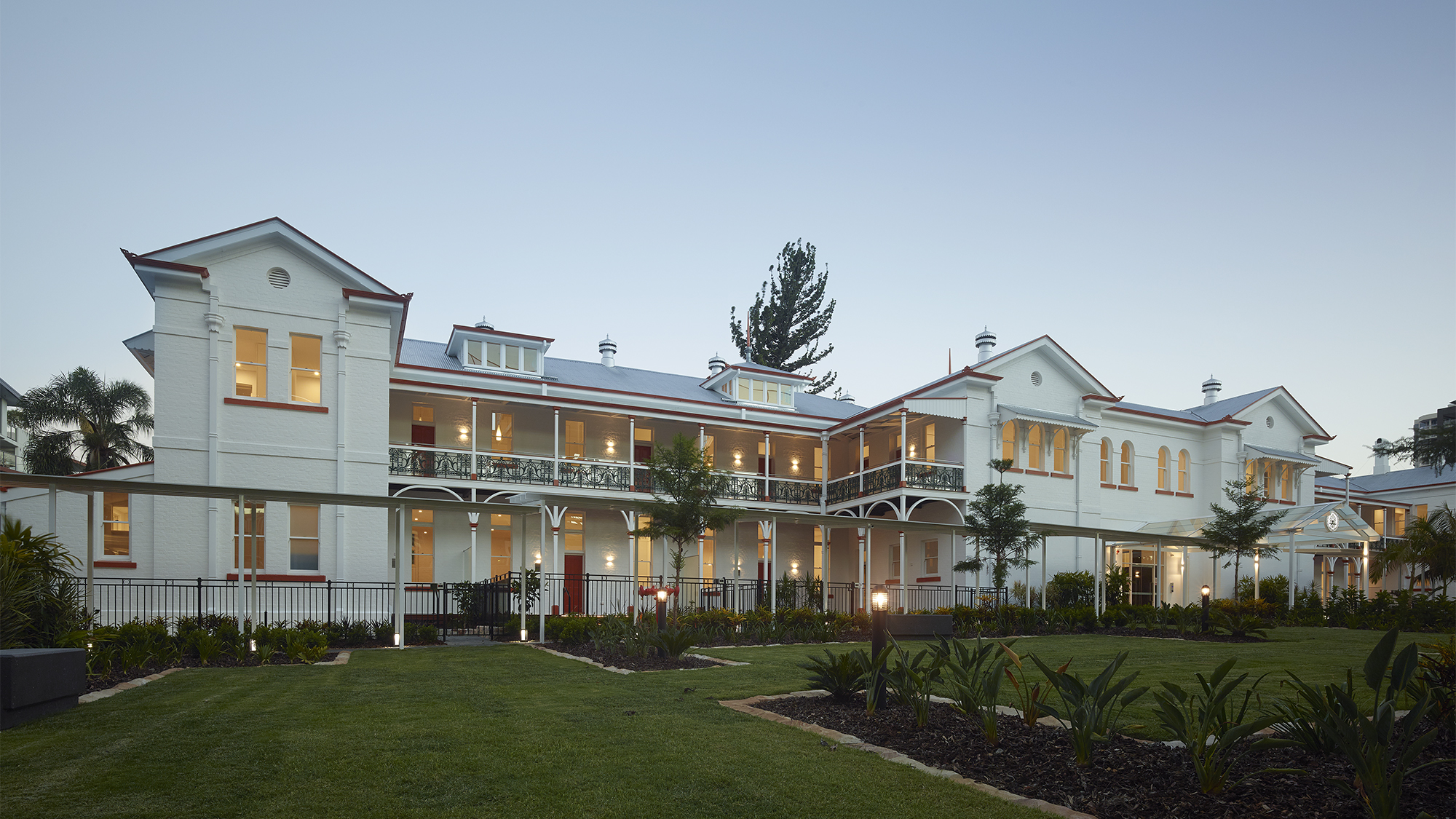 Historic Yungaba House started life as an Immigration Depot, commissioned by the Queensland Government in 1885 and completed two years later. In the 130 years that have since passed, Yungaba House has lived many lives, serving a different purpose for each generation than the one that went before them.

Today, the heritage-listed property sits amongst expansive manicured gardens and is home to ten private residences, lovingly restored and renewed by Frasers Property Australia and a team of the nation’s best architectural artisans.

A place of welcome

In 1859, Queensland became a separate colony to New South Wales and began offering assisted passage to British, German and Scandinavian settlers. To cope with the influx of people, in 1885 the Queensland Government commissioned an Immigration Depot which would be completed two years later and christened Yungaba House.

In 1901, Yungaba House was temporarily used as a ‘return house’ for Australian troops returning from combat in South Africa’s Boer War. In the war years of the 1900s, the property was used as a hospital for Australian troops, as well as a dispatch centre for food and clothing and a venue for welcome home ceremonies.

Yungaba House was used as the project and design office for Brisbane’s Jubilee Bridge, now called the ‘Story Bridge’, which opened in 1932. The women’s ward was converted to the drafting office and modifications were made to provide clear and natural light for drawing.

A place to call home

In 2003, Frasers Property (then Australand) purchased the Yungaba House site from the state government and embarked on a decade-long mission to restore and revitalise this iconic piece of Brisbane history.

Transforming the purpose of a building while preserving more than a century of history is no easy feat. For the team behind Yungaba House, the project required the developer, architect, and builder to be united in their approach to heritage design and restoration.

Experts in their field were sourced for the project including a team of specialist glaziers from Tasmania who were engaged by Hutchinson’s Builders to restore 135 windows to their former glory, replacing 400 pieces of glass in total. Beads and sashes were removed, individually catalogued and labelled. On refitting, each window was balanced and reweighted with extra lead as needed to ensure smooth operation.

The building’s proximity to the Story Bridge also made acoustics a key consideration. All windows were replaced with specialised acoustic glass, together with high-end door seals and window seals. Internally, partition walls and floors were designed with acoustics well above minimum requirements.

Each of the ten residences has a unique identity that draws upon the history of the property and its rooms in particular. For example, The Bradfield Residence was once part of the male dormitory and was designed to celebrate the sky lights that once filtered into Bradfield’s drawing studio.

“It was never about shoehorning ten apartments into a heritage building,” recalls Scott Peabody, Director of Arqus Design. “The way we approached the internal subdivision was to be very mindful of its former uses and to reflect this in the design and how that interfaced with modern living spaces.”

A place to call home

Today, Yungaba House is home to ten families who are adding their own legacies to the building’s rich history. One of them is Kim Hill, a long-time farmer from Gatton who fell in love with the building while walking the streets of Brisbane with her husband, searching for the perfect place to retire.

“As soon as I saw it, it got in my head,” says Kim. “When we discovered it was actually being restored and converted into residences, it became a bit of an obsession. I couldn’t believe we might be able to live in a place like that.”

The Hills purchased one of the ten residences and moved in shortly after. “Every single time I drive up to that gate, my heart nearly stops,” says Kim. “It’s absolutely magical and everything we hoped it would be. The fact that this property once welcomed new residents to Brisbane…there’s something very special about that.”

Cameron Leggatt, Executive General Manager, Residential at Frasers Property Australia says that everyone involved is incredibly proud of what they have created at Yungaba. “Our vision for Yungaba House has been clear from the very beginning,” says Leggatt. “This was an opportunity to restore one of Brisbane’s oldest buildings while preserving its historical integrity.”

“The work undertaken from the design right through to the construction has delivered a suite of world-class residences that will keep that history alive for generations to come.”

Find out more about the restoration of Yungaba House. Visit Yungaba.com.au